Normally I don't get unwell enough to call in sick at work. However, when I woke up at 5am, started walking toward the shower, my body told it that I need to crawl back into bed.

So that's exactly what I've done. I've tried to stay somewhat productive, catching up on Tech Review before tomorrow's meeting. But for the most part, I have a feeling I'll be spending the day in a state of zombie-hood. (On the plus side, I am certain that my students were delighted to skip class.)

Productive morning. I was showered and out of bed by 8am, and then put up the Christmas lights by 10am. (We won't know until it gets dark whether or not I did a good job.)

Cheri made more Chex Mix (the second batch of the season.)

My eldest daughter is hard at work on her Literature paper.

My youngest daughter is currently watching "A Nightmare Before Christmas" -- but she's also working on her painting for Art Class.

I just finished the revision of my bug-themed picture book. I don't know if it's good yet, but I do know that it's much better than the first draft.

I am wishing all of my friends and family the happiest of Thanksgiving. Now the holiday season is truly underway, isn't it?

I am working on a Thankfulness blog post, but I'm too sleepy to complete it this evening. Blame it on the tryptophan.

Before we drove to Orange County to feast with our friends, I did manage to do some creative work. My new goal is to do creative work every single day-- even if it's a work day. I'll use the blog to keep myself honest. Today's work involved a revision of my bug picture book. It's about halfway done.

We watched Moana. Disney might be a vast media empire, but they still know how to bring to life beautiful music, stories, and artistry. 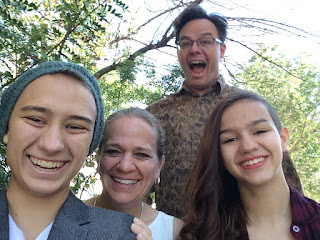 Back in the Creative Saddle (Again)

Survived a couple weeks without any family catastrophes. Let's keep this low-conflict November going, shall we?

The scorched landscape of California has finally relented to Autumn. It must be a chilly 68 degrees outside! Yes, it's Sweater Weather for Los Angelinos. It even rained yesterday. I'm going to savor this coolness while it lasts. All too soon, Summer will be sweeping through the valley -- and that's when I'll fly off to Washington state.

For the most part, aside from dealing with the little struggles mentioned in "The Ugly List" blogpost, I have spent the last month working on back-to-back shows: Around the World in 80 Days at the Canyon Theatre Guild, and our troupe's debut with our original play, Change the Station. I didn't have much physical or creative energy to spare for either production, so I was very dependent upon others -- and I'm grateful for everyone who led the way on each project.

What else have I been doing? I have been grading tons and tons of essays. But the good news is I am done with that mountain of paperwork... But I finally finished them. Thank goodness I didn't wind up like this guy: 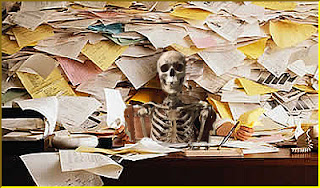 Now that I will have some spare time between now and Dec 15th (when final exams come rolling in), I really owe it to myself to get back in the saddle and get creative again.

I think I'll start by revising a picture book I developed over the summer. It needs a better second act and a bit more sympathy for the protagonist.  Wish me luck.


Three amazing weekends have come and gone. Our radio play, CHANGE THE STATION, debuted on Nov. 4th... And eight performances later, our production is over. It's in the can! Hard to believe.

Our producer, Randy Aronson, and our director (and co-author) Christopher Flowers worked their collective butts of, and they weren't the only ones. A lot of people came together to make this happen, and I am grateful for everyone of them. I'm also thankful that we had wonderful audiences. I wasn't sure if anyone besides relatives would bother showing up! If you are reading this and you were able to watch our show, thank you. Thank you so much for being there.

I posted some photos on my Tumblr page. I'll post some here too, but probably tomorrow. For now, I am tired. Tired but happy.

A lot of ugly, annoying, frustrating, and generally scaring things have been going on, and I don't just mean the election.

Let me try to condense it down into a concise list which will be known as The Ugly List:

1) Publishers rejected my graphic novel (mainly because of the artwork)

4) The martial arts studio -- an oasis for my daughters -- is going through a lot of turmoil. It's a family business, and now some family drama has led to the termination of one of their beloved instructors. His has caused a lot of heartbreak for my girls.

5) Worst of all: a family member's mental illness took a drastic turn. We tried to get help from many different places, and kept running into dead ends and wrong turns. Finally, we turned again to the emergency room to make sure this person was safe. (Seven days later, this person was released -- and is fortunately getting better each day.)

6) The fear that things won't get better.

7) Emily's birthday was in the middle of all this drama -- so, that must've sucked for her.

8) Mackenzie got bit by our dog while she tried to save a lizard. We rushed her to an urgent care facility, but they didn't have an Xray. (She thought her hand was broken.) So, it was yet another trip to the ER.

9) Oh, during one of those hospital visits, I got a parking ticket for $68 but that seems trivial.

10) We thought we would be welcoming a new niece and nephew into our family, but now it seems the birth mother has changed her mind and our dear friends may not be adopting twins after all. (keep your fingers crossed that there is still hope for them.)

Of course, things could be a lot worse. I am thankful that my loved ones are still alive and doing well. I am also thankful that I have a meaningful that provides good health insurance. Maybe next blog post I'll create a Gratitude List.

Does anyone else have a headache from this election season?

I'm voting for Hillary. The idea of Trump being president makes me miserable. However, even if Clinton does win, I'm wondering if her opponents will drag her down into the mire because of various scandals (which may or may not be true and relevant).

I'm trying hard to live in the moment, the now, to not dread the unforeseen.

It's not easy to do.

Here's a song that always makes me feel better.

During the last seven days I have experienced some of the most emotionally challenging decisions in my life as a parent.

Again, I'm not at liberty to reveal any details. Ultimately, it's not my story to tell. I am just a supporting character in a story about love, laughter, fear, freedom, inner conflict, confusion, mental health, and spiritual well-being. And the story isn't over. I don't know if it has a happy ending. Does anyone's story? I hope so.

But I do know, this chapter is over, and the last lines on the page are words of joy.

For me, and my family, today is a much better day than seven days ago. I hope yours is too. Hang in there, dear readers. May your world be turning in the right direction as well.