It's a Wonderful Life on Stage

If you are one of the dozen people who read my blog on a regular basis (bless your heart) then you know that one of my all-time favorite movies is Frank Capra's It's a Wonderful Life.

(In fact, one of my favorite blog posts is a tribute to that film, and include some of my favorite images from Capra's masterpiece, as well as a few thoughts from yours truly. You can check it out the blog post here... )

With that in mind, it won't come as a surprise when I say that the chance to play George Bailey on stage at the Canyon Theatre Guild is a dream come true. Thanks to an amazing director (to whom by coincidence I happened to be married) this long held wish has been fulfilled. Last Friday, It's a Wonderful Life debuted at the CTG. Here are a few photos taken at our dress rehearsal (cuz there's no flash photography allowed during actual performances, of course!) 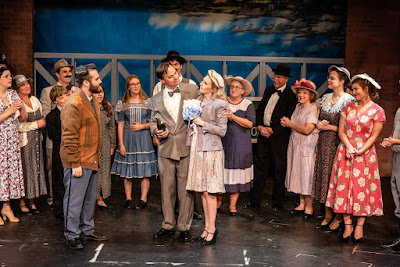 Cheri has assembled a friendly and talented cast... they already feel like family. I guess that's what happens when you start rehearsals in late September!

Always a pleasure to work with, Nicole Kowalski plays Mary Hatch. She has been very patient with me -- especially when I stumble my way through the Charleston during the dance at the gym. (Yes -- we do "fall into the pool" -- but you'll have to come see the show to see the theatrical way we bring that sequence to life.) 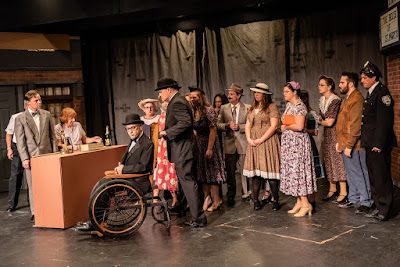 John Morris plays the "old money grubbing buzzard" known as Mr. Potter. So far, we've only had one rehearsal in which an actor accidentally called him Harry Potter -- and now I'm praying I won't make that particular goof during a performance. (Although I do rather like the idea of Harry Potter leaving Hogwarts, failing as a magician, perhaps going paralyzed from the waste down due to some basilisk accident, only to be stuck in the muggle town of Bedford Falls.) 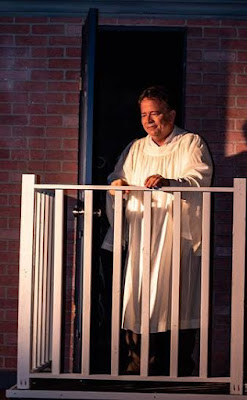 Tim McGowan plays Clarence -- and he's got the character down! Despite playing an angel, he's actually very down to earth -- from Brooklyn, in fact. There's a scene towards the end in which I throw him against a railing -- and Tim is such a good sport, throughout the rehearsal he's been saying, "Please, throw me aside as hard as you can!" 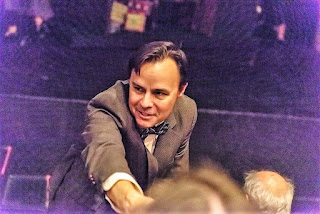 This is a rather odd photo of me... but I kinda like it. It's a snapshot taken during the play's happy ending (spoiler alert) in which I run around Bedford Falls hollering "Merry Christmas" to everyone... then, I go up and down the stairs, wishing the audience happy holidays. The crowd seems to love the interaction -- especially in today's Sunday matinee.

For eighteen more performances, I get to stay in Bedford Falls.


Gee whiz, I haven't posted anything all November. That might be because I have been INCREDIBLY BUSY -- as is usual this time of year. But this holiday season, I've been up to more than just my usual tasks of grading papers and going to work...

I've been rehearsing for It's a Wonderful Life -- fulfilling a lifelong dream of playing George Bailey. (And, of course, getting to work with a remarkable director, the woman who cast me -- my wife Cheri!)

Right now, as I am waiting to teach my last class before Thanksgiving, I am looking for some last minute musical selections.. I came across one of my favorite holiday numbers: a song called Night of Silence, which I discovered about seven years ago when my children participated in a holiday concert with the Master Chorale.

It's so sad yet so beautiful. Happy holidays! I trust your life is truly wonderful...