Summer is over... which usually means that the more productive I am at work (i.e. grading papers, attending meetings, coming up with brilliant lectures) the less productive I will be at creative writing.

But perhaps if I return to my Word Count Wednesday posts, I'll keep myself somewhat accountable.

What Have I Been Working On?

Well, I am between projects right now. During the summer, I wrote a chapter book about bug friends (sort of a Sandlot of the Insect World). I also wrote a new one-act comedy about an Escape Room. That's about it. (Oh, Chris and I also finished the second act of our play, All Inclusive.) I still seem to be reluctant to dive into a monumental work the size of Duck Town or Camp Omigosh... in part because I am lazy and in part because those larger projects never seem to pique the interest of editors. 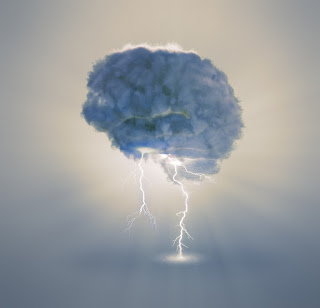 
How Do I Feel About the Process?

Well, since I am still in the brainstorming stage and haven't shifted into the actual writing part, part of me feels like I need to simply choose a project on which to focus and then start writing. However, if I am not ABSOLUTELY INSPIRED by a story idea, then that story usually falls flat...

So right now, I am in lightning rod mode. I weathering this brainstorm until inspiration strikes.


As my research continues, I have stumbled upon a wealth of resources, including an entire online textbook dedicated to Greek Drama. I also found a handy vocabulary guide that covers some of the key terms in ancient Athenian theater.

Finally, my favorite new video discovery appears to be created by a talented (amateur?) historian who explores the lives of women in both Athens and Sparta. The contrasts are fascinating, especially when one considers that the two cities states were a mere 230 miles from each other. (Perhaps I say "mere" because I am so used to driving in my Prius. If you made me walk or ride on horseback, I wouldn't be so cavalier.)


I ws telling my Lit students from Intro to Drama that when they research a project, they should explore not only written texts, but documentaries, audio podcasts, interviews, and even YouTube videos.

Well, I have stumbled upon a video series that will prove an excellent supplement to reading history articles. It's called a CRash Course in Theater, and it's brought to you by PBS and those lovable nerdfighters, Hank and John Green. Here's a preview... and if you like this style, there are plenty more episodes on Youtube.

And if you don't mind a few Lysistrata spoilers, check out the Crash Course guide to Greek Comedy...

Beyond Greece: Theater in the Ancient World 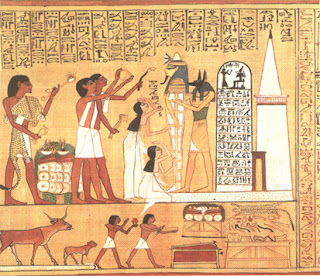 Behold: the Ramesseum Dramatic Papyrus in all its tattered glory! 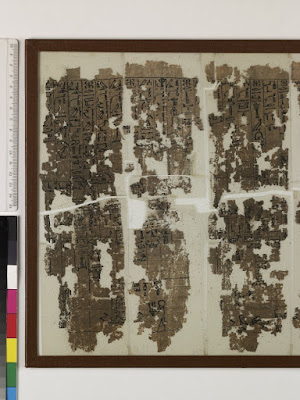 Get a closer look at this ancient document...

It illustrates / details a play-like ceremony celebrating both the pharaoh Senusret I as well as this guy... Everyone's favorite bird-headed God, Horus...

One of the most often performed ceremonies / myths is the violent tale of Seth and Osiris. 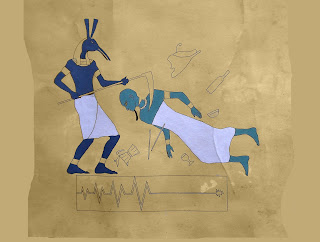 *not an actual line from the play

The themes of ancient India's plays are very much alive and well in Bollywood...

As with other Asian cultures in the ancient world, early Indian theater combined dance, costume, spectacle, music, and storytelling to bring mythical tales to life. However, unlike Egyptian theater, many of these stories were about everyday individuals, rather than about supernatural gods and demigods.

Little Clay Cart is an early example of this type of play... 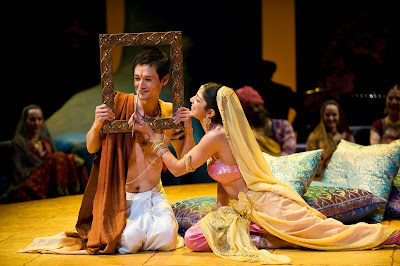 Chinese drama takes the notion of spectacle up several notches, including elaborate costumes, make up designs, complex song and dance, and even acrobatics.

Over the centuries it has developed into a wide range of genres and styles. It's earliest incarnations involved only two comical characters: a corrupt politician and a jester. 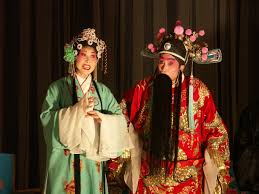 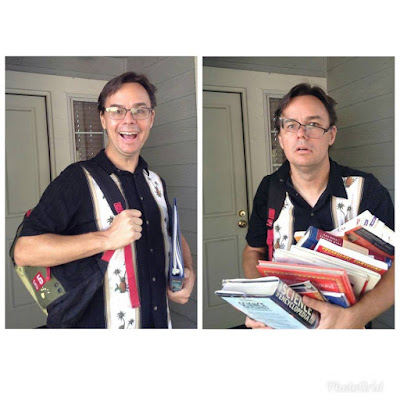 The Origins of Applause

Why do we applaud? How did slapping our hands together, often in large groups, become a communal form of approval?

Although I am not a psychologist or an anthropologist, I love to speculate as to the origins of human behavior. Why do we clap? Why do we boo? Why do we laugh out loud when something amuses us?

Until we get a time travel machine and visit the first caveman dance-off, we will probably never know the true origins of applause.

But there's a fascinating article that makes an attempt:

A Brief History of Applause: the "Big Data" of the Ancient World

In a nutshell, clapping is an immediate way for the masses to share an opinion. Author Megan Garber brings together clues from Ancient Rome and a few other archaic societies to demonstrate the very democratic roots of applause. If an actor, musician, or a politician want a measure of their success and adoration, applause will provide instant results.

Some of my favorite tidbits from the article:

At the end of performances in ancient , the actor would sometimes say, "Valete et plaudite!" This meant "Goodbye and give me applause!"

Laudiceni (also known as clackers or claques) were professional clappers. If you paid enough money, a group of them would show up to applaud,

There's also an amusing albeit disturbing anecdote about Stalin and applause.

Also, the author mentions how in ancient , historians noted that there were three types of applause labeled:

The bricks, the roof tiles, and the bees

Good job with the article, Megan Garber. Let's give it up for her. *claps*

PS: Here is a cool V-Sauce video that digs deeper into the topic.


One of the projects I've been working on this summer is an online creative writing course for children.

It's called Castle Writemore... and I am currently beta-testing the site, if you'd like to check it out for free!

It's that time of year again... Time to say goodbye to these amazing days of whimsy and relaxation, and time to get ready to go back to the ol' grindstone.

You know how they say, Time Flies... well, lucky for me, this summer felt so jammed packed that it didn't seem like the time flew away from me. It's felt like 90 days... because it's been 90 days. (0 great days -- some of them productive -- some of them lazy. All of them spent with people I truly care about.

My blog posts have been pretty sparse during this time off. However, I have been keeping on journal of the summer... and I have made an entry for every single day. I thought about posting the entries online, but it might be way too boring and self indulgent... It's basically entries such as: "Ate at Wood Ranch Grill; had the tri-tip sandwich" and "I finally watched Ant Man and the Wasp." That sort of thing, just to keep tabs on the events of the day.

So, what am I doing with my last week? (Today I watched the aforementioned Ant Man sequel). Tomorrow and Wednesday I will be organizing my syllabi and course schedules. I'm also going to get ahead on some of the reading for the course. I am teaching something brand new: Introduction to Drama. So, I need to get a bit more familiar with some of the older plays. You know, the really ancient ones from Greece and Rome.

I also have a couple meetings this week. Friday is our Flex Day at Moorpark. That's when we reconnect and touch base with our department / division. They have bagels. So that's nice.

But it won't be all dull, grown-up stuff this week. We will hopefully be visiting the beach this weekend. The perfect way to celebrate the end of a splendid summer.

Greetings aspiring authors and Up-and-coming illustrators! (And anyone wishing to do a good deed...) Welcome to our online fundraising event: Kid Books VS Cancer.


Let's help Alex’s Lemonade Stand Foundation move one step closer to finding a cure for all children with cancer! You can join me by helping me plan this event, attending my event, or making a donation right to this page. The money you donate will pay for research to find better treatments and cures for childhood cancer. Please help kids and their families by providing desperately needed hope!

This is a fun way for children's book authors to receive feedback on their manuscripts and donate to a worthy cause. Any amount is welcome -- however, from Aug. 2nd to Aug 15th, if you donate $100 on this page, author/playwright Wade Bradford will read you picture-book manuscript and provide one-on-one feedback (via email, video, or phone) to help bring out the best in your work. He will also give you tips and advice about the world of publishing.
Wade Bradford is the author of AROUND THE WORLD IN A BATHTUB (Charlesbridge),  PAPA BEAR'S PAGE FRIGHT (Peter Pauper), and THERE'S A DINOSAUR ON THE 13TH FLOOR (Candlewick).
Check out of fundraising page...
Posted by Wade at 6:50 PM No comments: