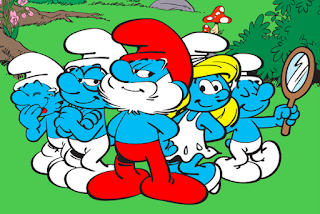 The Smurfs have a special place in my heart. But I'm not sure why.

At first glance, the Smurfs seems like a totalitarian society. We have a bearded leader
in a red hat who leads a communist society of shirtless followers. (Karl Marx, anyone?)
Perhaps worst of all, there is only one female in their community. (And she was created
by the evil Gargamel as a trap to lure male Smurfs to their doom.)

There must be some logical reason I loved the Smurfs, right? Let me try to map it out...

I was an animation junkie. I still love cartoons today -- but I prefer watching quality
cartoons. When I was ages zero through twelve, quality did not matter. If it was animated,
I was hooked. I even watched Davey and Goliath, for crying out loud. So, yeah, one reason
why I watched the Smurfs was because it was a cartoon and it was on TV on Saturday
Mornings.

But there were other cartoons on other channels. So why did I watch the Smurfs?

Reason #2) I Can Relate to Clumsy Smurf

Anybody who has spent time with me will soon discover that I'm rather clumsy. I'm not
sure how many times I have dropped books or papers from my desk. I don't know how
many times I've accidentally given my wife a flat top while carelessly walking behind her.
It's actually amazing that I haven't cracked this iPad which I am now writing upon.
I was especially accident prone when I was a kid, so yeah, I definitely related to this guy. 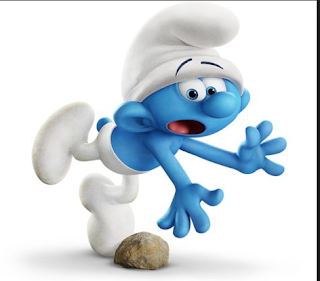 More than our common bond of the Dropsies, I also connected with Clumsy because
throughout grade school I always had friends who were (at least in my opinion) much
smarter than I was. Clumsy always tagged along with Brainy. And Brainy sometimes
went out of his way to make Clumsy feel lesser-than. I don't know that my friends ever
did that intentionally -- but sometimes I felt that way Clumsy felt. The nice thing about
this Smurf, though, is that he has good intentions and a good heart -- so even if he
trips and falls and causes some disaster in the Smurf village, his goodness
always prevails in the end.


Smurfs, for me, really started with the merchandise. Before ever seeing the Hannah Barbara
program, I remember being a kid and walking into a little European themed shop in
Leavenworth, Washington and discovering hundreds of these funny little blue figurines.

They had a Smurf for every activity. Baking, snorkeling, trumpet playing, bowling...
I bought my grandparents a Golfer Smurf.

Peyo and his team of artists definitely had a clever marketing strategy: invent a Smurf
for every personality, every interest. And when you take all of these different personalities
and abilities and stick them together in a mushroom village, you are going
to create an interesting world -- one that will spark a child's imagination.

I was so heavily influenced by the Smurf's that I copied Peyo's strategy and made up my own
cartoon characters: The Snorts. They were a lot like the Smurfs, but they were more like
lizard-humanoids who lived in your garden.

As I got older, even today as a writer, I became fascinated with the idea of telling ensemble
stories about a community. If I wasn't so hooked on watching the Smurf's every Saturday
morning, I'm not sure I would have ever come up with the expansive world I built for my
graphic novel Duck Town.

I know what you're thinking... WHAT THE SMURF ARE YOU TALKING ABOUT?

Well, that's precisely my point. The dialogue of the Smurfs included a lot of the word SMURF
in it. And it turns out, sometimes when they said the word SMURF, those Smurfs were angry.

On more than one occasion Papa Smurf would tell Brain to "SMURF UP!"

I loved these exchanges. I loved how the word SMURF could be a verb or a noun or
an adjective (if you added a Y). It became a very useful word for a kid like me who
avoided the F-word and any other expletives. If I stubbed my toe, I would cry OH SMURF IT YOU MOTHERSMURFER... and that way I could have a vocal outlet
without breaking the house rules regardingcurse words.

Did you ever watch this show? Did you have any nostalgic connections to it?