Much of today was spent going back and forth to the Canyon Theatre Guild. Cheri and Rena (she's the co-director of the show) were busy putting the final touches on the set. Sam Novak stayed up until four in the morning finishing the backdrops, and they look marvelous. The downside was the little bit of paint splatter on the stage. So that called for more black paint! President Doug Holiday was also on hand, helping up post some diner signs to an otherwise blank wall. Things are looking good!

Mackenzie also had some last minute lighting problems. But eventually, everything was fixed -- for the most part.We even returned home for a few hours in the afternoon. We walked the dogs, and I worked in Photoshop, assembling six pages of Chapter Four.

Everyone involved deserves many paragraphs of praise written about each of them. But since I don't yet have the time or the energy, let me just say that Cheri and Rena knocked this one out of the proverbial ballpark. The whole cast and crew did. Everyone took things up two notches and the audience was with them the whole way. Emily sat next to me during the show (we were third row center, so awesome seats) and she kept whispering things like, "That's so cute! That's so funny! I love that so much!" If you can make a musical that is beloved by senior citizens and teenagers, you've created something pretty amazing. But what else would you expect from an amazing woman like Cheri? 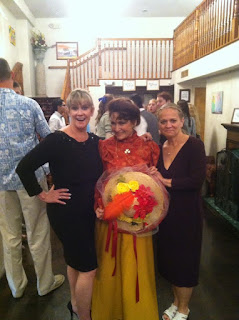