I was tempted to title this article "Dealing with Rejection," but what does that verb "deal" even mean? To me, it has the connotation of card games. It makes me think of Hearts -- when you're dealt that deadly Queen of Spades and you have to decide if you want to keep it or pass it along to another sucker at the table.

"Dealing" also makes me think of "wheeling and dealing," as if I am working at a used car lot, and I'm trying to convince a customer to but a Ford Pinto that has been "well-loved" by its previous owner. That kind of "dealing" seems like a form of self-deception. Or it could be deflection -- you're passing this lemon onto somebody or something else. The same way we'd like to pass the blame onto someone else when we get a rejection from an agent or a publishing house. "They just don't know how brilliant I am! It's their loss!"

I used to "deal" with rejection letters by ignoring them. It was easy when I was young. Most of my rejections were soulless form letters, and since the editors/agents put little effort into giving me feedback, I put very little effort into feeling rejected.

But that changed when my writing improved and people began to send me "thoughtful" rejection letters. That's when you get some encouragement, some positive criticism, but it ultimately ends in a "no thank you." Those ones were painful. Sure, I was happy to receive the praise... but it was frustrating to get so close to publication, only to ultimately get handed a big fat NO.

When my first play was finally published (this was back in 1999) I had been a sniveling author for about 13 years of my life. (I say "sniveling" instead of "struggling" because my best friend and wife Cheri made my life the opposite of a struggle -- but I sure did whine a lot during those early writing years.) After that first small but meaningful success, it was easier to absorb the sting of rejections.

Today, I still snivel. But I sell a lot more plays, and I've got a few books sold as well. I don't whine nearly as much. Rejection still hurts. It still annoys me. It's still frustrating. But I don't try to "deal" with those feelings, that is to say I don't try to deflect them or argue against them. I don't curse the publishing industry whilst shaking my fist at the sky.

I listen. And I learn. And I allow myself to feel however the rejection makes me feel. I don't wallow in misery, but I don't automatically try to turn that frown upside down. Two days ago, I received some very insightful notes from an editor and, you can guess where this is going, she ultimately decided to pass on the project. I wasn't terribly surprised, but I'd be lying if I said I wasn't disappointed. So I let myself feel disappointment, going over the comments as many times as I like. I've been wrangling this rejection for the past 48 hours, and now I've got a ton of creative energy, and a better understanding of what that particular editor is looking for, as well as ideas on how to continue to improve my writing. Oh, and along the way my frown has turned upside down, all by itself.

Rejection used to hit me like a stampede. It would trample my ego for weeks on end. There's no way to "wheel and deal" a herd of cattle when it charges in your direction. But there is a way to wrangle those beasts and make them work for you! 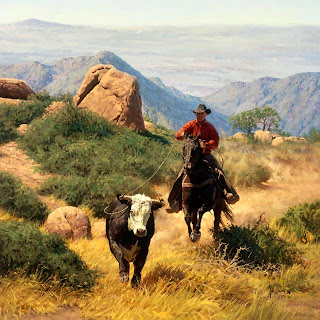